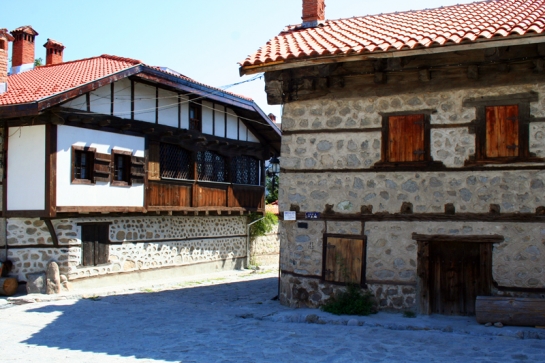 Bansko is one of the oldest settlements in the foothills of Pirin Mountain. It is located along important roads. Due to its convenient location, the settlement develops extremely fast and during the 18th century it is among the wealthiest settlements across the southwestern Bulgarian territories. The brisk craft and trade activity gradually makes it an economic center, and due to the economic strengthening and growth of Bansko citizens during the National Revival and their trips to the developed countries in Western Europe, Bansko quickly develops as a settlement of urban appearance and becomes one of the most important centers in Northeastern Macedonia.

As a real proof of the wealth of the well-to-do trade families, the interesting ancient houses – fortresses of Bansko, equipped to ensure the security and active defence of their owners, exist even nowadays. They are distinguished from the widely spread types of Bulgarian mountain house due to their complex interior outlay, the availability of service rooms, secret corridors and hiding places, due to their stone structure.

Bansko fortified house is a National Revival House, subtype of the Razlog-Chepintsi house from the South Bulgarian region. Suggestions exist that its design has been brought from Italy.

The mesilnik (knead place), the vodnik (water tank), the cellar, the podnik (cattle shed) and other management rooms are located in the basement, and the houses of Bansko traders and craftsmen have accommodated also the shops and craft workshops there.

The upper floor is constructed around a longitudinal porch providing access to the main functional group of residential rooms – “kashchi”, a living room and women’s room each of them equipped with fire places. The transitional rooms are typical for the construction in Bansko, which is especially important for the protection of the owners against possible attack. The living room has not been used for the needs of the family and has always been well arranged and covered with the most beautiful and colourful rugs waiting for its guests. The women’s room is the place where women have got together to work. “Kashchi” is the main residential room in the National Revival house in Bansko. Here is the fire place for preparation of food, and as a rule small bays are located at its sides, where the utensils are kept. There are inbuilt or installed closets (cupboards) on the walls where blankets, clothes and other belongings are kept, and the food products are stored in their lower part. The low round table around which the family gathers is in the middle of the room. This room also accommodates the big plank-bed where the children in the family sleep. In wealthier homes, there is an exit to the backyard staircase in the corner of the room. In Velyanova house a narrow porch is erected and fenced with planks along the whole length of the floor. Here the laundry is hung out, then comes the toilet followed by the bathroom. There is an entrance to the service rooms from the big porch too.

The most typical feature of the fortified Bansko house is the presence of a stone residential core adapted for temporary accommodation and defence.

The walls of the house are solid made of stone, and the external walls are up to 1.20m thick. Openings, called “firing halls” are made in these walls intended for shooting in case of attack. The doors are low, stable, made of white fir wood, and with iron sheet ferrel. The windows are small, protected with iron grids from the outside, and with wooden covers from the inside, barred with sliding beams inbuilt in the wall.

The porch is wide, surrounded by beautifully designed parmaks (railing elements) and skillfully indented wooden columns. A wooden sink resting on slanted beams overhangs above the yard opposite to the “kashchi” door.

From the porch one can go to the “hut”. The hut can be seen only in the Bansko house and represents an open board terrace leaning to the yard and connecting the management buildings with the residential rooms. This is a wonderful place where women are sitting with their handiwork in the sun during the spring and the autumn, and during the summer heat on this airy platform they dry fruit for oshaf (stewed dried fruit), noodles, tobacco, hay, etc.

Bansko houses in the style of the National Revival are surrounded and fortified from the outside by high stone walls and white fir gates.

The original residential construction in Bansko cannot be seen in the surrounding settlements across the Razlog valley. It is due not only to the increased material abilities of the citizens of Bansko, but also to their higher spiritual culture.

View the embedded image gallery online at:
https://visit-bansko.bg/en/what-to-see/the-old-city#sigProGalleriaa944597b37
More in this category: « Central square THE OLD CINEMA in Bansko »
back to top