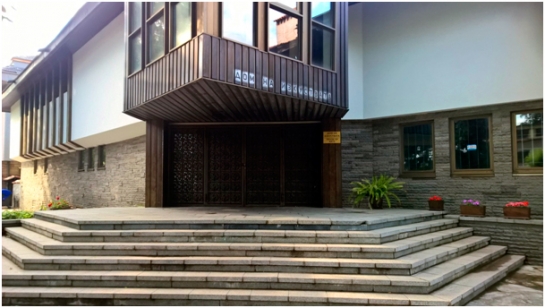 The building erected especially for museum purposes, has modern, impressive architecture and is connected to Nikola Vaptsarov Museum. The interior design is modern and multifunctional. Permanent and temporary exhibitions of historical and cultural nature are organized here, research fora, meetings with public figures dealing with culture, film lectures, spectacles, etc. are also staged in the House of Arts.

One of the halls hosts the permanent exhibition entitled Bansko – Center of Literature. It is realized after the Scientific Symposium on the same topic held in 1989. By the idea of the prominent researcher of the Bulgarian National Revival literature – Prof. Dr. Ilia Konev, eminent scientists substantiate the thesis that Bansko has played an important role in the establishment and development of the Bulgarian literature. The exhibition comprises varied pictures and documentary materials, books, manuscripts, etc. showing the contribution of local people to the enrichment of the national culture. Special place is dedicated to the three titans of the national spirituality who Bansko gives to Bulgaria during each of the last centuries: in 18th century – Paisiy Hilendarski, in 19th century – Neofit Rilski, and in 20th century – Nikola Vaptsarov.

Tweet
Published in Museums in Bansko and the region
More in this category: « Spiritual-historical center “St. Paisiy Hilendarski” MUSEUM COMPEX - BANSKO »
back to top