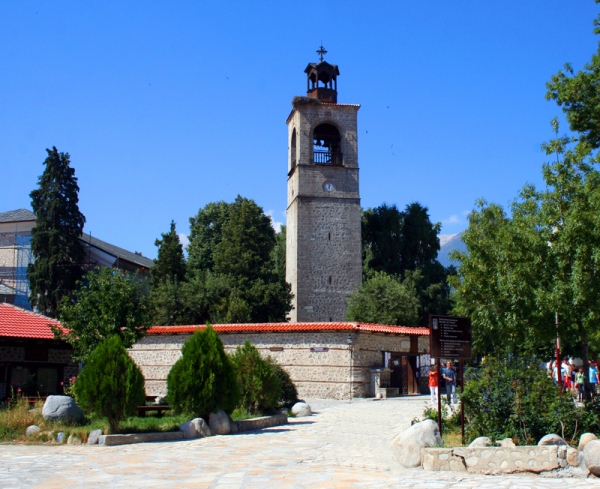 The temple complex comprises the church, the bell tower and the fencing wall, and is announced a monument of architecture.

The church represents a three nave basilica erected in 1835 by local masters upon initiative of the Bansko trader – Lazar German.

Above its main entrance, one can see a Christian cross and a Turkish crescent close to each other – a symbol of tolerance between the two religions.

The name of Lazar Glushkov comes up among the maso masters who construct the temple during the period 1833 - 1835. It is painted by some of the most prominent masters from the Art School of Bansko and Debarsko – Usta (Master) Velyan Ognev, who has created the unique carved iconostasis, the original wall paintings on the columns and the cupola, the bishop’s throne, the twelve columns symbolizing the twelve apostles. The skilful wood carving shoulders the huge Crucifixion of Jesus above the altar entrance. The artists from the Molerovs family: Toma Vishanov, Dimitar Molerov, Simeon Molerov and the last one – Georgi Molerov, create the wonderful big icons on the iconostasis and the small kissable icons, and Simeon Molerov who also creates magnificent icons for the iconostasis.

The bell tower in the yard of the church is erected some time later – in 1850, by Usta (Master) Gligor Doyuv. It is 30 m high and is considered a symbol of the city of Bansko. In 1866, a clock is installed on the tower. This clock is constructed by the self-taught master Todor Hadzhiradonov. The entire Razlog Vally has been echoing with the unique song of the four Veleganovi bells for centuries.

The whole complex is considered one of the most outstanding achievements of the Bulgarian culture from the National Revival period.

St. Trinity Church in Bansko is consecrated two years after being finished – in 1837 during the five centuries long Ottoman Yoke.

Tweet
Published in Churches in Bansko and the area

View the embedded image gallery online at:
https://visit-bansko.bg/en/what-to-see/churches-and-monasteries/item/3958-st-trinity-church#sigProGalleriae2224e4b8f
More in this category: Assumption of Virgin Mary Church »
back to top