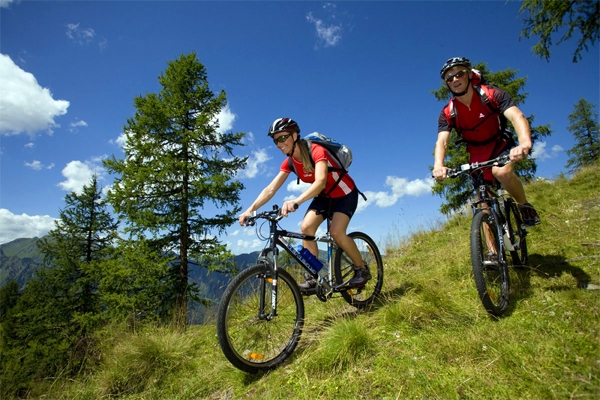 Bansko Municipality constructed new bike lane under grant agreement within the project “Establishment of Cross-Border Cultural Cooperation”, which is 2250 m long from the city of Bansko to St. Nikola archeological complex.

Mountain biking is a sport activity for keeping fit and achieving endurance. At the same time, this sport is not aggressive to environment and offers real delight. It can be practiced during the summer – from 1st of June until the end of September.

The marking comprises a circle, like a wheel with a colour point inside. Routеs reach to all settlements in the valley and are extremely attractive. Their difficulty level varies from 1* to 5*.

Ponderosa Rout /red marking, 5*, 42km/ It starts from Predel location with two branches of the rout: one of them to St. Ekaterina location and Katarino SPA 4* Hotel – city of Razlog, and the second one passes along old forest roads to the village of Bachevo – city of Razlog.

Perfect Day Rout /orange marking; 4* level of difficulty; 18km/. It may start both from Bansko and from the area of the Pirin Golf Club. The path passes along the border of Pirin National Park.

Foxy Lady Rout /pink marking, 3* level of difficulty, 25 km/. The rout passes along a field road from Bansko in the direction of the village of Banya. Bansko, Rupchovets region – a railway is crossed – St. Georgi location – Dabovets – village of Banya - Bansko

Dead Dog Rout /blue makring; 3* level of difficulty, 23km/ - the rout passes in the foothills of Pirin above the city of Bansko in the direction of Dobrinishte. Bansko – DKP – St. Nikola – Dobrinishte - Bansko. For your trip back to Bansko, you may use the narrow railway gauge or the agricultural road that runs in the foothills of the mountain. For cyclists who are not prepared enough, the rout can start from DKP which can be reached by car.

The Flying Scotsman Rout /yellow marking, 3* level of difficulty, 22km/. Downhill from Bezbog Hut to Mocharata location along the old forest road ending in Dobrinishte, or continuing to Trionska meadow and downhill to Bansko

View the embedded image gallery online at:
https://visit-bansko.bg/en/pirin/item/4035-mountain-biking#sigProGalleria24ab3181fe
More in this category: « Location and Borders of Pirin Park
back to top