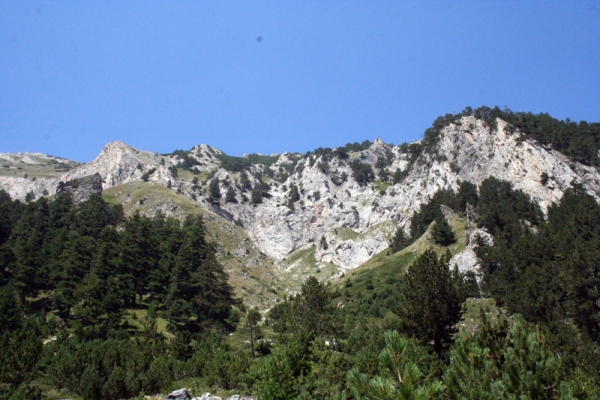 Vihren is the highest peak in Pirin Mountain. With its 2914 meters it is the second highest peak in Bulgaria after Musala in Rila, and third highest peak on the Balkan Peninsula after Mytikas in Olympus (Greece). It is locates in the northern part of Pirin on the main ridge between Kutelo peak (to the northwest) and Hvoynati peak (to the southeast). The saddlebacks Premkata (2610m) to the north and Kabata (2535m) to the east connect Vihren to those two peaks.

Kutelo is the second highest peak in Pirin Mountain. It is 2908m high. Just like Vihren that is located in the vicinity to the south, Kutelo is a marble peak, but its slopes, even though very steep, are not rocky and there are less and not so complex alpinist tours.

Koncheto is steep and hardly accessible saddleback in North Pirin. It is located on the main mountain ridge at 2810 m. It takes the lowest and steepest part of the karst edge between the peaks Banski Suhodol from the northwest and Kutelo from the southeast.

Todorka or Todorin peak is a massive peak in Pirin, Bulgaria, which is highest at Todorino side ridge, and actually the single peak that is located there. With its 2746m it ranks 11th in the mountain.

Bezbog or Besbog is a granite peak in Pirin located on Plezhansko side ridge. It is 2645 m high. The peak is situated at the branch of the Polezhansko ridge, which deviates from Polezhan and once again makes a branch from the very Bezbog peak.