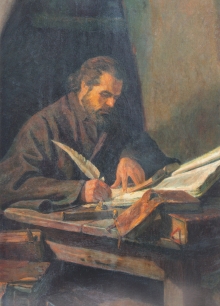 Monk, forefather and inspirer of the Bulgarian National Revival, first historiographer of Bulgaria.

He is the little son in the family of the wealthy trader from Bansko – Bilyo Baanov, and Katerina Kundeva. Paisiy’s bigger brother – Lazar, becomes a monk with the name Laurentius in the Hilandar Monastery. He is repeatedly mentioned in the chronicles of the monastery. Hadzhi Valcho is the middle son of Bilyo Baanov – one of the most generous donors of the Hilandar and Zograf Monastery.

In his Istoria (History), Paisiy notes that he goes to Mount Athos in 1745 to meet his brother Laurentius in the Hilandar Monastery. There, he begins collecting data for his Istoria, he frequently travels as mendicant friar, collects donations and brings pilgrims to the monastery. In 1761 he visits the city of Karlovci, Serbia, to deal with some monastery affairs, but actually, as he himself states in the post scriptum, he investigates information about the Bulgarian history in the library of the Serbian patriarchate. In 1762 he leaves the Hilandar Monastery and moves to the Zograf Monastery where he finds favourable conditions to finish his book. Even today, the draft of the Istoria is kept in the library of the monastery.

Paisiy carries around and disseminates his Istoria alone. He is a man of bright mind, eager for knowledge, devoted to the spiritual upsurge of his people. The plenty of copies and modifications that are known even nowadays are evidence for the impact of Istoria Slavyanobalgarska. This Istoria puts the beginning of the Bulgarian National Revival, and the people names Paisiy its Patriarch.

View the embedded image gallery online at:
https://visit-bansko.bg/en/about-bansko/eminent-persons-from-bansko/item/3948-paisiy-hilendarski#sigProGalleria481da59c4f
More in this category: « Nikola Vaptsarov
back to top